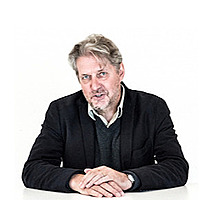 Derrida was fascinated by Heidegger’s gesture of crossing through the word Sein in the 1955 “Zur Seinsfrage,” a text in which Heidegger, responding to Ernst Jünger, also reflects on the ambiguity of the German expression “über die Linie,” (“over the line” and/or “concerning the line”). To address the difficulties in play here, around lines, limits, frontiers, and crossings, I will take as my main focus Derrida’s text “Apories” (in which he uses the word “frontière” more than anywhere else in his corpus), and attempt to elucidate and perhaps complicate his provisional distinction between three senses of the notion of frontier: the geo-political, the disciplinary, and the conceptual. I will attempt to understand what happens when we re-apply the results of that elucidation to that threefold distinction itself, and dwell on and in the resulting aporia that is arguably the very place where deconstruction is on the line.

Please use the following Zoom link.

Free and open to the public.

Sponsored by the Society of Fellows and the Comparative Literature Program.

Dates and times subject to change. Please go to the Dartmouth Events Calendar and Comparative Literature Program website for updates.