A Superpower Laid Low: America and the World after January 6 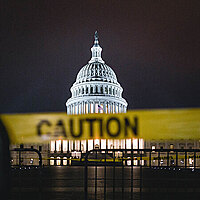 A Superpower laid low: America and the World after January 6

Michèle Flournoy, Co-Founder and Managing Partner, WestExec Advisors; and former US Under Secretary of Defense for Policy under President Barack Obama

Moderator, Daniel Benjamin, President, American Academy in Berlin; and former Coordinator for Counterterrorism at the US Department of State under President Barack Obama

The breaching of the US Capitol, a symbol of one of the world’s oldest democracies, by a pro-Trump mob on January 6, 2021, marked the culminating point of years of seditious rhetoric, incitement to violence, disinformation, and institutional destabilization by the outgoing US President. Next to the far-reaching implications at home, these events are bound to have a serious impact on US foreign policy after Joe Biden takes office. This panel co-organized by the American Academy in Berlin and the John Sloan Dickey Center for International Understanding at Dartmouth College seeks to address these implications as well as likely international security ramifications more broadly.

To join this online event, please register at www.americanacademy.de/events

Co-sponsored by the American Academy in Berlin, the Lloyd Cutler Discussion, and the John Sloan Dickey Center for International Understanding, Dartmouth College.