Film on Demand: "The Twentieth Century"

Like Monty Python crossed with low-budget sci-fi and German Expressionism, this absurd take on Canadian history follows a rising politician obsessed with power and women's shoes. 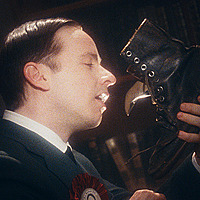 In his quest for power, King must gratify the expectations of his imperious Mother, the hawkish fantasies of a war-mongering Governor-General and the utopian idealism of a Québécois mystic before facing one, final test of leadership. But his romantic vacillation between a British soldier and a French nurse, exacerbated by a fetishistic obsession, may well bring about his downfall. Culminating in an epic battle between good and evil, King learns that disappointment may be the defining characteristic of the twentieth century!

All Hop films are now presented virtually and on demand through Eventive. Once you rent the film, you will have until the last date listed below to watch it.
See our step-by-step instructions and FAQ for more information.

Free for Dartmouth students and Hop members. Get tickets here.

For more information, contact:
Hopkins Center for the Arts
hopkins.center@dartmouth.edu
603 646 2422
Permanent URL to this event: https://news.dartmouth.edu/events/event?event=62027