A 3-part radio adaptation of a 1932 play about the rising tide of European fascism, reframed against the American backdrop of Great Depression and the Bonus Army marches. 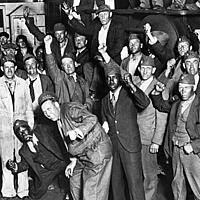 Faith, Hope, and Charity
Part One
by Ödön von Horváth, in collaboration with Lukas Kristl
adapted by Peter Hackett
from a translation by Peter Fabri

Performing on Dartmouth College Radio and via YouTube
October 31, November 1-2 at 7:30 pm
A Department of Theater MainStage Radio Play Performance

A young woman struggles against cynicism and despair as she makes her way through a world wracked by dehumanizing poverty, institutional oppression, and bureaucratic indifference. Originally written during the Great Depression as a surreal and subversive commentary on the rising tide of European fascism, this new radio-play adaptation reframes the story amidst the American backdrop of the 1932 Bonus Army marches on Washington and the violence that ensued.

Faith, Hope, and Charity will be aired as a three-part radio play via Dartmouth College Radio. Each act will also be available via the Hopkins Center YouTube Channel HERE.
Part One: Saturday October 31
Part Two: Sunday November 1
Part Three: Monday November 2
Performances will take place at 7:30 pm each evening. Each act will remain available on YouTube following its premiere. ​

FOR A SNEEK PEEK OF THE PERFORMANCE: catch a Faith, Hope, and Charity teaser HERE!