The final film from the late, beloved Agnès Varda is a characteristically playful and personal summation of the director's own brilliant career. Free for Dartmouth students! 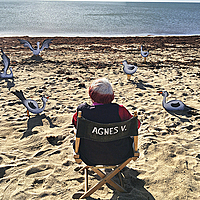 When Agnès Varda died last year at age 90, the world lost one of its most inspirational cinematic radicals. From her neorealist-tinged 1954 feature debut La Pointe Courte to her New Wave treasures like Cléo from 5 to 7 to her inquiries into those on society's outskirts like Vagabond, The Gleaners and I, and the 2017 Oscar nominee Faces Places, Varda made enduring films that were both political and gratifyingly mercurial.

What's more, her work toggled between fiction and documentary decades before it was cool. Interweaving onstage interviews with a wealth of archival footage, Varda by Agnès guides us through her career in this remarkable final film—a fitting farewell in her own words. D: Agnès Varda, France, subtitled, 2019, 2h

This fall, all Hop films will be presented virtually and on demand through Eventive. Hop Members and Dartmouth students get tickets to these films for free! Log in to the Hop website as usual, get your ticket, and in your Order Confirmation email from the Hop Box Office, you'll receive links and instructions to watch the film on Eventive.