Dartmouth Professor Mia Costa moderates a panel of scholars who will discuss the recent presidential election, what happened, and what to expect next. 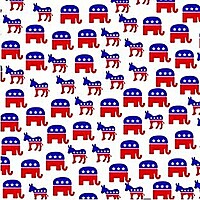 Dr. Carlos Algara is an Assistant Professor of Political Science at the University of Texas at El Paso, joining the department in fall 2020. Prior to coming to UTEP, Dr. Algara was a 2019-2020 American Political Science Association Congressional Fellow placed in the United States Senate. He received his Ph.D. from the University of California, Davis. His research agenda focuses on the nature of ideological representation in the United States, political parties, electoral accountability, legislative behavior, and what factors inform the policy preferences of the mass public.

Dr. Jamil Scott is an Assistant Professor of Government at Georgetown University. She received her doctorate from Michigan State University in Political Science and her bachelor’s degree from the University of Maryland, College Park in Psychology and Government & Politics. She is a past recipient of the King-Chavez Park Future Faculty Fellowship as well as co-PI on a grant from the New America Foundation. She has published in Politics, Groups, and Identities and American Politics Research. She is currently working on her book-length manuscript in which she seeks to understand Black women’s political emergence in state-level politics.

Dr. Amber Spry is an Assistant Professor in the Department of Politics and the Department of African and African American Studies at Brandeis University. Dr. Spry’s research addresses the dynamics of political attitudes and behaviors in United States politics. Specifically, she is interested in political behavior, identity, race and ethnic politics, political psychology, protest and social movements, and survey design methods.

Mia Costa is Assistant Professor of Government at Dartmouth College. Her research focuses on representation, public opinion, gender, and participation in American politics. She received a Ph.D. in Political Science from the University of Massachusetts Amherst.