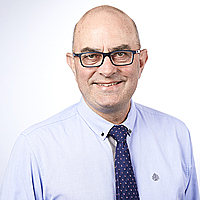 Please join us for our monthly Biomedical Data Science Grand Rounds with Patrick Kinney, ScD, the Beverly A. Brown Professor of Urban Health at Boston University School of Public Health on Thursday, February 20 at 12:00 p.m. in Auditorium H, DHMC.

A light lunch will be served on a first-come, first-served basis.

Climate change is among the most significant societal challenges of this century.  Air quality is affected by climate in ways that are important for human health, including anthropogenic pollutants, pollen, wildfire smoke, and windblown dust.  I will provide an overview the role of climate change I these environmental factors, and present findings on current and potential future health risks.

Patrick Kinney is the Beverly A. Brown Professor of Urban Health at Boston University School of Public Health (BU SPH). His teaching and research address issues at the intersection of global environmental change, human health, and policy, with an emphasis on the public health impacts of climate change and air pollution. His early work examined the human health effects of air pollution, including studies of the effects of ozone and particulate matter on lung health and on daily mortality in large cities. Before coming to BU SPH, Dr. Kinney created and directed the first climate and health program in the US at Columbia University’s Mailman School of Public Health. Dr. Kinney was the first to show that climate change could worsen urban smog problems in the US, with attendant adverse health impacts. He also has projected future health impacts related to heat waves in cities around the world. At BU SPH, Dr. Kinney’s work focuses on assessing health impacts of air pollution and climate change in cities, and the health and climate co-benefits that can be achieved through carefully planned mitigation and adaptation strategies. Dr. Kinney earned his doctorate at the Harvard School of Public Health, where he studied the effects of air pollution on lung function in children as part of the Harvard Six Cities Air Pollution and Health Study.