An engaging documentary about the Dartmouth students who challenged a divisive library cataloging term and joined the immigration debate on Capitol Hill. 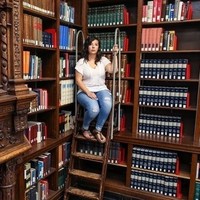 The power of words is incalculable. While researching immigration at Dartmouth, Melissa Padilla ’17 kept encountering the term “Illegal Aliens” as a library subject heading. Subject headings are created by the Library of Congress as categorical descriptions and are essential to how libraries collect, organize and disseminate books and other materials.This controlled vocabulary determines how library users find information across the US and impacts how people think, write and communicate.

Committed to promoting the rights and dignity of undocumented peoples, Melissa, Oscar Ruben Cornejo Casares ’17 and other student activists petitioned Baker-Berry Library to change its terminology. When that failed, they went to the source. The Library of Congress considered their petition … and then Congress got involved. This library reference term ultimately became a flashpoint in the ongoing immigration debate on Capitol Hill. From one library to a national conversation, Change the Subject is their story.

This engaging and important documentary was made possible by widespread campus support and directed by Sawyer Broadley ’08 and librarian Jill Baron. After this special advance screening, the film will enter the festival circuit to reach a national audience.