American Diplomacy and the Case for Its Renewal 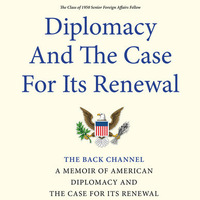 The Back Channel: A Memoir of American Diplomacy and the Case for Its Renewal

President of the Carnegie Endowment for International Peace.

Bill Burns is president of the Carnegie Endowment for International Peace, the oldest international affairs think tank in the United States. Ambassador Burns retired from the U.S. Foreign Service in 2014 after a thirty-three-year diplomatic career. He holds the highest rank in the Foreign Service, career ambassador, and is only the second serving career diplomat in history to become deputy secretary of state.

Prior to his tenure as deputy secretary, Ambassador Burns served from 2008 to 2011 as under secretary for political affairs. He was ambassador to Russia from 2005 to 2008, assistant secretary of state for Near Eastern affairs from 2001 to 2005, and ambassador to Jordan from 1998 to 2001. His other posts in the Foreign Service include: executive secretary of the State Department and special assistant to former secretaries of state Warren Christopher and Madeleine Albright; minister-counselor for political affairs at the U.S. embassy in Moscow; acting director and principal deputy director of the State Department’s policy planning staff; and special assistant to the president and senior director for Near East and South Asian affairs at the National Security Council.

Sponsored by the John Sloan Dickey Center for International Understanding. Made possible by the Class of 1950.