Film: "If Beale Street Could Talk" 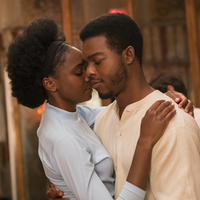 Two years after astonishing audiences and taking home the Best Picture Oscar for Moonlight, Barry Jenkins returns with his most accomplished, lyrical work to date. Set in early-1970s Harlem, this adaptation of James Baldwin’s stunning romance begins as 19-year-old Tish (KiKi Layne) hesitantly reveals to her mother (Regina King) that she’s going to have a child. Though this would normally be news for celebration, Tish’s happiness is tempered by the fact that her baby’s father Fonny (Stephan James) is in prison after being falsely accused of a crime he didn’t commit.

Through flashbacks, Jenkins presents the story of Tish and Fonny as they mature from childhood friends into devoted partners, eager to build a life together. And in the aftermath of Fonny’s arrest, Tish and her family fight to get him out of his current predicament despite the indifference and outright racism of a system determined to keep young men like Fonny in jail. While the themes of Beale Street are urgent and often tragic, the film is also suffused with warmth, capturing both its characters’ suffering and their joy.

Reteaming with Moonlight cinematographer James Laxton, Jenkins’s visuals are at once startlingly intimate and panoramic, paying as much reverent attention to his actors’ faces as he does to the brightly hued, meticulously rendered world they inhabit. A fitting tribute to Baldwin and a striking reminder of Jenkins’s unique talent, If Beale Street Could Talk is a stirring, soulful portrait of black love and resilience.