Arthur Brooks addresses the divisions that plague America & finds a set of strategies to help us disagree better, forge a new model of aspirational leadership, & unite the country. 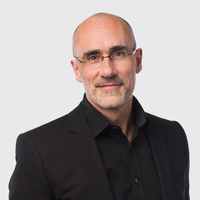 No matter what our political views, few people believe our country is as united as it should be. Whether in the media, politics, or even in our personal relationships, we all recognize that the country is increasingly defined by a culture of contempt – in which people treat others with whom they disagree as defective, or worthless. Within this distressing reality, however, there lies an opportunity for our nation. Drawing on history, social psychology, behavioral economics, and the counsel of ancient wisdom, Arthur Brooks addresses the divisions that plague America, and finds a set of strategies to help us disagree better, forge a new model of aspirational leadership, and unite the country.

Arthur C. Brooks is president of the American Enterprise Institute (AEI), a nonpartisan public policy think tank in Washington, DC, where he is also the Beth and Ravenel Curry Scholar in Free Enterprise. Additionally, Dr. Brooks is a columnist for the Washington Post and host of the podcast “The Arthur Brooks Show.”

At 19, Dr. Brooks left college to work professionally as a classical musician (a period his parents described as his “gap decade”).  During this time, he toured the United States with the Annapolis Brass Quintet, recorded albums with jazz guitarist Charlie Byrd and others, and spent several seasons as associate principal French horn with the City Orchestra of Barcelona.

In his late twenties, Dr. Brooks returned to college by correspondence and studied economics, mathematics, and modern languages, eventually earning his B.A. while still working as a musician. He went on to pursue an M.A. in economics at Florida Atlantic University and a Ph.D. in public policy at the RAND Graduate School in Santa Monica, California. His doctoral work focused on applied microeconomics and mathematical modeling.  While earning his Ph.D., Dr. Brooks also conducted research for the RAND Corporation on theater-level combat models for the US Air Force.

Upon completion of his doctorate, Dr. Brooks joined the faculty of Syracuse University as a professor of public administration. For ten years, he taught courses in economics and social entrepreneurship and conducted research on happiness and the economics of philanthropy.  He was the Louis A. Bantle Professor of Business and Government at Syracuse until assuming the presidency of AEI on January 1, 2009.

Dr. Brooks has published dozens of scholarly articles and 11 books on topics including philanthropy, military operations research, the future of conservatism, and human happiness. His next book, “Love Your Enemies,” will be released in March 2019 (Broadside Books, 2019). Previous books include New York Times bestsellers “The Conservative Heart: How to Build a Fairer, Happier, and More Prosperous America” (Broadside Books, 2015) and “The Road to Freedom: How to Win the Fight for Free Enterprise” (Basic Books, 2012) as well as the textbook “Social Entrepreneurship” (Prentice Hall, 2008).

Dr. Brooks delivers more than 100 speeches annually around the US, Europe, and Asia. He appears regularly on radio and television and is a frequent guest host for programs such as CNBC’s “Squawk Box.” He writes frequently for the Washington Post and publishes featured pieces in outlets such as The New York Times, The Wall Street Journal, Commentary Magazine, and Foreign Affairs. In the spring of 2019, he is releasing “The Pursuit,” a feature-length documentary film that explores the themes of poverty alleviation and human happiness both at home and abroad.

In the summer of 2019, he will join the faculty of the Harvard Kennedy School and Harvard Business School.