This exhibit is an exploration of both the novel’s influence on modern society and the texts and works that influenced its creation and publication two hundred years ago. 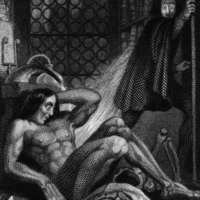 Shelley's Frankenstein in Text and Image

This year marks the 200th anniversary of the first printing of Mary Wollstonecraft Shelley’s first novel, Frankenstein; or, The Modern Prometheus. Shelley began writing the novel when she was eighteen years old, in 1816, after a visit to Lake Geneva with her lover and future husband Percy Bysshe Shelley and Lord Byron. Both men were highly influential figures in the Romantic literary movement in England, which itself was an inspiration to Mary Shelley and her writing. While at the lake, Shelley had a “waking dream” in which she imagined Victor Frankenstein bringing his monster to life. Two years later, her nightmare became a story that has fixated and entranced readers ever since.

Today, Frankenstein continues to influence and captivate generations of readers and writers. Over the last several centuries, the book has been called a Gothic novel, an important text of the Romantic movement, and even the first true science fiction story. The character of the monster, in particular, has endured numerous interpretive representations, each one saying more about the culture in which it appears than the monster himself. This exhibit is both an exploration of the novel’s influence on society but also the texts and works that influenced its creator.