Cyrus is a reporter for NBC News’ tech investigations, and is also an author and radio producer. 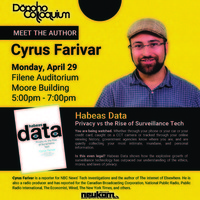 Books available for purchase, provided by the Norwich bookstore.

Habeas Data: Privacy vs. the Rise of Surveillance Tech
You are being watched. Whether through your phone or your car or your credit card, caught on a CCTV camera or tracked through your online viewing history, government agencies know where you are, and are quietly collecting your most intimate, mundane, and personal information.

Is this even legal?

Cyrus is a reporter for NBC News' Tech Investigations, and is also an author and radio producer. His second book, Habeas Data, about the legal cases over the last 50 years that have had an outsized impact on surveillance and privacy law in America, is due out May 8, 2018 from Melville House.  In 2017, Cyrus Farivar and Joe Mullin won the Technology Reporting award from the Society of Professional Journalists, Northern California Chapter for their August 2016 story: “Stealing bitcoins with badges: How Silk Road’s dirty cops got caught.” Cyrus’ first book, The Internet of Elsewhere—about the history and effects of the Internet on different countries around the world, including Senegal, Iran, Estonia and South Korea—was published in April 2011. From 2010 until 2012, Cyrus was the Sci-Tech Editor and host of “Spectrum” at Deutsche Welle English, Germany’s international broadcaster. He has also reported for the Canadian Broadcasting Corporation, National Public Radio, Public Radio International, The Economist, Wired, The New York Times and many others. He’s also survived three VfDs on Wikipedia. However, on a 4th VfD attempt in February 2007, he was, in fact, deleted. He was added back briefly in 2015, then deleted again. His PGP key and other secure channels are available here.

He is based in Oakland, California.