Film: "In the Intense Now" 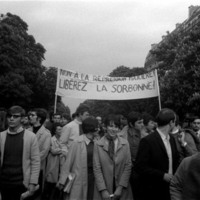 Made following the discovery of amateur footage shot in China in 1966 during the first and most radical stage of the Cultural Revolution, In the Intense Now considers the fleeting nature of moments of great intensity. Scenes of China are set alongside images of the events of 1968 in France, Czechoslovakia and Brazil. In keeping with the tradition of the film-essay, these segments investigate how people who took part in upheavals continued on after passions had cooled. Archival footage reveals the state of mind of those filmed—joy, enchantment, fear, disappointment, dismay—and sheds light on the relationship between a document and its political context. What can one say of Paris, Prague, Rio de Janeiro, or Beijing by looking at the images of the period? Why did each of these cities produce a specific form of record?

Narrated in first person, the film reflects on what is revealed by images from four sources: the French students’ uprising in May of 1968; the invasion of Czechoslovakia in August of the same year, when forces led by the Soviet Union put an end to the Prague Spring; the funerals of students, workers, and police officers killed during the events of 1968 in the cities of Paris, Lyon, Prague, and Rio de Janeiro; and the scenes that a tourist—the director’s mother—filmed in China in 1966, the year of the Great Proletarian Cultural Revolution.