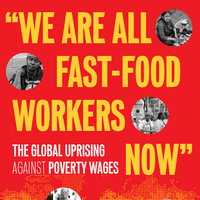 Dartmouth History Professor Annelise Orleck and photographer Liz Cooke recently collaborated on the book We Are All Fast Food Workers Now: The Global Uprising Against Poverty Wages. Professor Orleck and Ms. Cooke will engage in a conversation about their work together on this project and also on earlier projects including Soviet Jewish Americans and the Jews of Brooklyn.

Tracing a new labor movement sparked and sustained by low-wage workers from across the globe, "We Are All Fast-Food Workers Now" is an urgent, illuminating look at globalization as seen through the eyes of workers-activists: small farmers, fast-food servers, retail workers, hotel housekeepers, home-healthcare aides, airport workers, and adjunct professors who are fighting for respect, safety, and a living wage. With original photographs by Liz Cooke and drawing on interviews with activists in many U.S. cities and countries around the world, including Bangladesh, Cambodia, Mexico, South Africa, and the Philippines, it features stories of resistance and rebellion, as well as reflections on hope and change as it rises from the bottom up.

Annelise Orleck is Professor of History at Dartmouth College. Her areas of expertise include U.S. history since 1877, U.S. political history, U.S. women, women and American radicalism, race, ethnicity and immigration, Jewish immigration, and gay and lesbian studies. She was born and raised in Brooklyn, New York, “where you can travel around the world without ever venturing more than a few miles from home.” Brooklyn's amazing assortment of cultures sparked her interest in the study of history and ethnicity which continues to this day. We Are All Fast Food Workers Now: The Global Uprising Against Poverty Wages is her fifth single-authored book, and a second collaboration with photographer Liz Cooke. The first collaboration was a 1999 book called Soviet Jewish Americans, about Russian Jewish immigration to the U.S. between the 1970s and the early 21st century. All of Professor Orleck’s other books are about poor people’s activism, particularly organizing and struggle by poor and working-class women. Professor Orleck earned her B.A. from The Evergreen State College, and her M.A. and Ph.D. from New York University.

Liz Cooke was born and raised in Brooklyn NY. She is the recipient of a National Endowment for the Humanities grant to photograph Holocaust survivors and Soviet emigres in her childhood neighborhood of Brighton Beach, Brooklyn. Her work has appeared in numerous publications. Most recently her photographs of Newburgh NY were featured in the Guardian (UK). She was a collaborator with Dartmouth College Professor of History Annelise Orleck on a book about the global living wage movement, We Are All Fast Food Workers Now: The Global Uprising Against Poverty Wage, which took her to Cambodia, the Philippines and around the US, where she photographed garment workers, farm workers, fast food workers and sex workers. Liz is the founder of Abandoned Hudson Valley, a photographic exploration of abandoned and neglected places of the Hudson Valley.