Event Cinema: Hitler vs. Picasso and the Others

An incredible journey into the world of stolen Nazi art and the “condemned” works that have finally come to light. 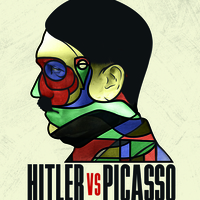 “As Hitler came to power in 1933, he declared ‘merciless war’ on ‘cultural disintegration.’ He ordered an aesthetic purge of the entartete Künstler, the ‘degenerate artists,’ and their work, which to him included anything that deviated from classic representationalism: not only the new Expressionism, Cubism, Dadaism, Fauvism, futurism, and objective realism, but the salon-acceptable Impressionism of van Gogh and Cézanne and Matisse and the dreamy abstracts of Kandinsky. It was all Jewish Bolshevik art. Even though much of it was not actually made by Jews, it was still, to Hitler, subversive-Jewish-Bolshevik in sensibility and intent and corrosive to the moral fiber of Germany. The artists were culturally Judeo-Bolshevik, and the whole modern-art scene was dominated by Jewish dealers, gallery owners, and collectors. So it had to be eliminated to get Germany back on the right track.” — “The Devil and the Art Dealer” Vanity Fair, March 2014

From 1933 to 1945, the Nazi regime systemically looted approximately 600,000 pieces of art, mainly from Jews but from all across German-occupied Europe. This Raubknust or “Nazi Robbery Art” is the subject of a new immersive documentary that profiles five exhibitions and the tragic personal stories behind them. The story begins in 1937 when the Nazis held two exhibitions in Munich: one to stigmatize “degenerate art,” and one, personally curated by Hitler, to glorify “classic art.” The film ends with last year’s show at Bern’s Kunstmuseum of 1,500 “lost” artworks, hidden for decades by the son of a Nazi art broker. Along this incredible journey, recovered masterpieces by Botticelli, Klee, Matisse, Monet, Chagall, Renoir and Gauguin are intertwined with human stories of survival during the most infamous period of the 20th century.

A state-of-the-art detective story exploring the Nazis’ obsession with art and creativity, Hitler vs Picasso offers viewers a rare look at condemned works that have finally come to light.