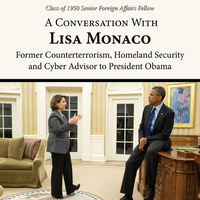 A Conversation with Lisa Monaco

Lisa Monaco served as Homeland Security and Counterterrorism Advisor to President Barack Obama from 2013-2017. In this role Monaco coordinated policy development and crisis response to terrorist attacks, cyber incidents, public health emergencies and natural disasters. Prior to the White House, Monaco served in senior positions at the Department of Justice including as Assistant Attorney General for National Security and Chief of Staff to FBI Director Robert Mueller. She currently serves as Distinguished Senior Fellow at New York University Law School and as Senior Fellow at Harvard’s Kennedy School of Government.

Sponsored by the John Sloan Dickey Center for International Understanding and the Class of 1950. Dartmouth College. Free and open to all.